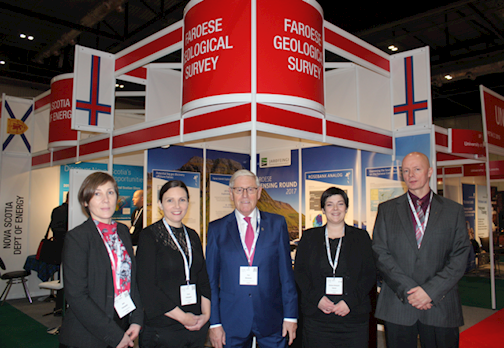 The aim of the event was to inform the industry of the preparatory work that is being performed at Jarðfeingi these days for the upcoming 4th Licencing Round for hydrocarbon exploration on the Faroese continental shelf (FCS). This work is key to the maturation of the FCS before the official opening of the round in Mai 2017.

Some major results from this preparatory work will be presented at the 5th Faroe Islands Exploration Conference (FIEC) which will be held during 16-18 Mai next year.

At the opening of the event the Minister Counsellor of the Faroe Islands in the United Kingdom, Áki Johanson, introduced the Minister of Foreign Affairs and Trade, Poul Michelsen and Heri Ziska, Head of Exploration at Jarðfeingi.

Thereafter the Minister held a speech where he presented the new licensing strategy regarding the Faroese Continental Shelf. He was followed by Heri Ziska, who gave the oil companies an overview and brief insight into the preparatory work that is being performed at Jarðfeingi at the moment.

In addition to being presented at the upcoming FIEC in May, the main results of the preparatory work will be published in a booklet for distribution during that same event.