SiS.net has published a new success story, this time in the form of a very interesting interview with Agata Goździk, coordinator of the EDU-ARCTIC project, which is about attracting young people to natural sciences and in particular to polar research.

The partners in the EDU-ARCTIC project came from six institutions from Iceland, Norway, France, Poland and the Faroe Islands.

“The basic idea of EDU-ARCTIC was to attract youngsters to science, STEM and scientific careers in Arctic research. The idea for EDU-ARCTIC eveloped from a large educational programme, EDUSCIENCE, which we ran in Poland from 2011-2015. It offered a variety of activities for schools, such as online lessons, visits to geophysical observatories, or science picnics at schools. But it also featured two contests for young people that had the finalists travel to our Polish Polar Station Hornsund, which was received with great enthusiasm by Polish schools. Since the Arctic held an obvious fascination for both teachers and students, we wanted to take this idea to the European level, and this is how EDU-ARCTIC started.”

The main objective of the EDU-ARCTIC project was to main objective was to incite young people’s interest in STEM and make them think about a possible future career in scientific research. The Arctic is a very sensitive region which affects what happens in our latitudes, so, basically, we wanted to show the importance of the Arctic, and raise awareness within society of what is happening right now in this area. 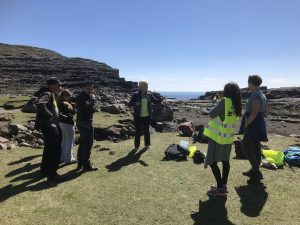 Article on the EDU-ARCTIC school competitions