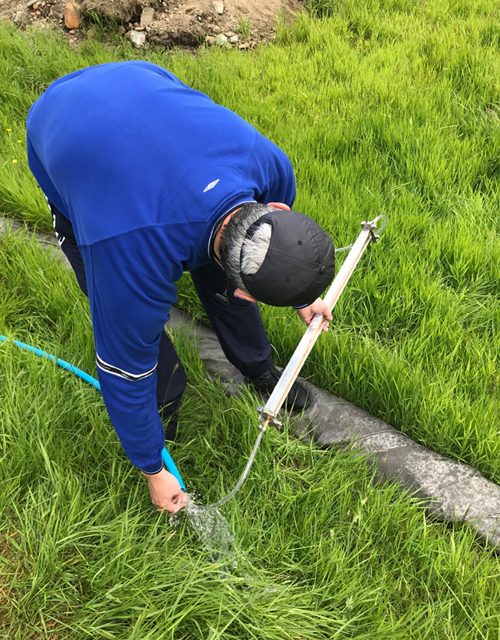 The article discusses a shallow geothermal energy system found in the Lygnnes area in Kollafjørður, the Faroe Islands, in 2014 on the basis on especially the electrical logging measurements that were carried out in three of the boreholes in 2016. One of the tools used was an Optical Televiewer which gave a good 360° picture of the borehole wall. It was especially this tool combined with a flow log that proved to be very useful, as it was possible to see where the water enters the boreholes. Based on the data available six major water influx zones were identified in all three wells and of the six, three turned out to be controlled by fractures striking north/south, were two of the fractures had an aperture of 7 centimetres. Another conclusion is that the abnormally high groundwater temperature of 27 degrees Celsius found in the Lygnnes area can be explained by a topography-driven vertical convection as an effect of the high terrain surrounding the area. A third conclusion was that the relatively large variation in the flow rates and temperature between the five investigated boreholes possibly indicates the system to be confined.

The United Nations (UN) has 17 sustainability goals, amongst those, the partial goal 7.2 stating that the amount of sustainable energy shall increase substantially by 2030. A better utilisation of the shallow ground source heat potential, which in case of the source in Lygnnes can heat up to 150 houses, could be one possibility for the Faroe Islands. The energy calculations were published in the report Grundvatn í Føroyum, in 2015 http://jf.fo/wp-content/uploads/2018/02/Grundvatn-í-Føroyum.pdf.

At the moment the water is being chemically analysed in order to find out how long the water has been circulating in the subsurface and what the maximum water temperature has been, as this data could give important information on the refilling and the depth of the system.

The PhD project is sponsored by Granskingarráðið (The Faroese Research Counsel), Grunninum fyri Førleikamenning (The Fund for Faroese Competence Uplift) and Jarðfeingi (the Faroese Geological Survey).

The article is available online, but will be published in Geothermics volume 82 later this year. Link for the abstract can be found here: https://www.sciencedirect.com/science/article/pii/S0375650518303614

Figure 1. A simple sketch of the system in Kollafjørður. Figure 2. A close-up of one of the fractures controlling the water influx in one of the wells. The aperture of this fractures is 7 centimetres.

Figure 3. From the logging at one of the boreholes in Kollafjørður in January 2016.